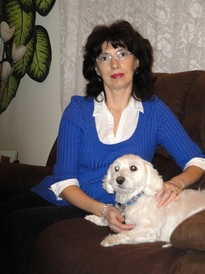 Here are some of the author's thoughts regarding her roots:

“I was born in Romania, a beautiful country in Eastern Europe. Our history goes back 2000 years. The Romanian people emerged from the inter-ethnic blend between the native Dacian population that lived in trans-Carpathian Mountains and the Romans, when the Roman Empire expanded to the east and conquered Dacia in the year of 106AD. The last king of Dacia, Decebal, had the Headquarter not far away from my home town Deva , at Sarmisegetuza.
Nowadays Romania is known more in relation with the vampire legend of Dracula and the great achievements of the women gymnastic team that surface every four years at the summer Olympics, a tradition that began with the great Nadia Comaneci in 1976 in Montreal.
However Romania gave much more to the world than that. Here are some of the most valuable people that this country of Latin origin (no, we do not speak Russian) brought to universality:

Henri Coanda inventor of aerodynamics and builder of an experimental aircraft, the Coanda 1910 described by Coandă in the mid-1950s as the world's first jet. He invented a great number of devices, designed a "flying saucer" and discovered the Coanda Effect of fluid dynamics.
The composer, violinist and pianist George Enescu, whose Symphonies and the Romanian Rhapsody traveled the world.
Mihai Eminescu the romantic poet,novelist and journalist, often regarded as the most famous and influential Romanian poet whose poems reached way beyond his time exploring the human nature as well as the universal cosmos.
Constantin Brancusi the gifted sculptor considered the pioneer of modernism.
Mircea Eliade philosopher and writer, and one of the most interesting personalities of the 20th Century.

I lived in Romania long enough to experience the constraints of the Communism regime, the televised Revolution in 1989 when the Iron Curtain fell, and waited for the light of democracy to shine at the end of the tunnel…
Sadly it did not, and I decided to immigrate to Canada.”

Diana Branisteanu lives in Southern Ontario, Canada with her husband and the family dog,Teddy. She has a engineering degree in Electronics and Telecommunications, and works for a telecommunication company. She started to write in 2009.

Life Under The Dark Sky is her first novel.
Her second novel The Blind Luck, was released in August 2012.
Diana have finished her third novel, "Revolving Luck".