There is new book store in Simcoe Ontario!
Charming oasis for book lovers invites readers to browse shelves full of bestsellers for every age. From children books to the latest new released novels, the store is ofering a large selection of wonderful books. The owner of the store, and the employees are the most welcoming persons, ready to give you advice, or information you may seek.
All my three novels are available at this store, and I am so excited to be featured in such a lovely establishment.
www.fireflyandfox.com/

I am pleased to announce that I will be at Indigo book store in Burlington on Saturday May21st, 2016 between 1pm and 5pm to hold an in-store event and book signing. All my novels will be available.

Many thanks to Chapters Burlington management and staff for their help and support on April 30th, 2016. They made my book signing session an enjoyable one.
I am delighted to be able to hold a book signing event at Chapters in Burlington on Saturday April 30th, 2016 from 1pm to 5pm. The store is located on Fairview Street. I hope to meet many readers! 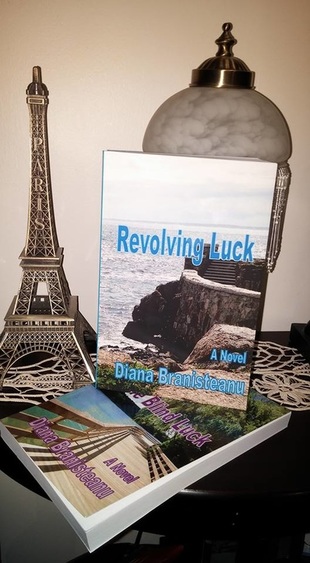 My second book of Luck series has been released. Revolving Luck is now published.  The “Luck” trilogy presents contemporary romance with a grain of mystery and a good dose of character evolution. 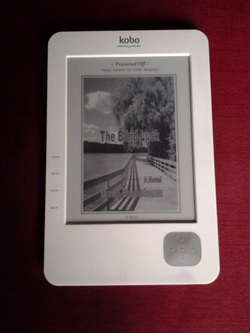 
The wait is over!
My novels are now available for Kobo readers. At my book signing events, many people expressed interest in Kobo format e-books.

﻿﻿Life Under The Dark Sky﻿﻿


I am delighted to announce that "Life Under The Dark Sky" is now available in Burlington at A Different Drummer Books.

A Different Drummer Books is an independent book store with over 40 years presence in the community.

On June 1st, 2014 I held a Reading and Book Signing event at the.
A big Thank you to the store owner Ian, and to my family, friends, and guests that participated at this event.

The store location is at 513 Locust Street  L7S 1V3 just off Brant Street in downtown Burlington.

Many thanks to John Aguiar, manager of Indigo Burlington and the entire store staff for allowing me to hold the Book Signing event last Saturday.

Both my novels are available at the store in Canadian Authors section.

I'm very pleased to report that "Life Under the Dark Sky" has reached #86 on Kindle ranking at Amazon.com 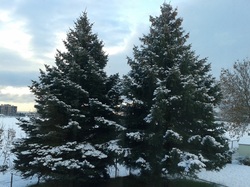 It is my pleasure to announce that my novels are now available at Indigo Burlington, in Canadian Authors section.
This is great news for Burlington readers looking for gifts for loved ones this Holiday Season. 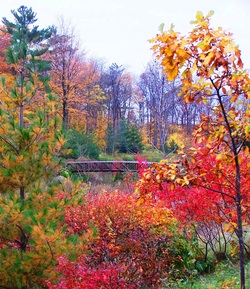 The events that took place over the weekend at both INDIGO book stores gave me the opportunity to meet wonderful poeple interested in my work. Thank you to the management and staff of these two beautiful stores for making that possible for me.
Also INDIGO Erin Mills in Mississauga, and INDIGO Milton, both carry my novels on their shelves.
Thank you!

October 28th, 2012
Dear readers,
I hope you all enjoy the Fall's colors, and a good reading.
On Saturday November 3rd, 2012  between 12pm
and 4pm you are invited to a Book Signing event  at:
INDIGO book store at 5105 Glenn Erin  Drive Mississuaga, ON, next to Erin Mills
Town Center  Mall.
On Sunday November 4th, 2012 between 12pm and 3pm I will be at INDIGO in Milton (Steels Ave and James Snow Pky, noth of 401HWY). 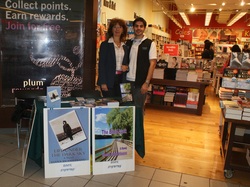 October 21st,2012
Coles Book Store at 5100 Erin Mills  Pky. Mississauga ON--Erin Mills Town Center, held a Book Signing event for both my novels, on Saturday October 20th, 2012.
This was a great opportunity for me to launch “The Blind Luck” and
to continue to promote “Life Under The Dark Sky” which has already been well
received by readers.
Manny thanks to the store manager and staff for their support ,and for making both my novels available to the Canadian readers.
I am pleased to announce that The Blind Luck and Life Under The Dark Sky can be purchased at this store.


I am delighted to announce that my second novel "The Blind Luck" has just been released on Amazon.


I hope everybody enjoys summer! 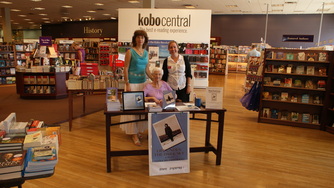 A big "Thank You" to the management and staff of Chapters Oakville Town
Centre for giving me the opportunity to meet with new readers of Life Under The Dark Sky, on Saturday July 28th, 2012. I had the pleasure to connect with interesting people and share their stories of family history. 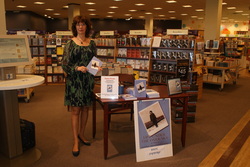 My appreciation goes to the management and staff of Chapters book store in Mississauga Square One for holding the book signing event for my novel.
I thank all the readers and customers who stopped by my table and showed interest in my work.
Happy Victoria Day weekend! 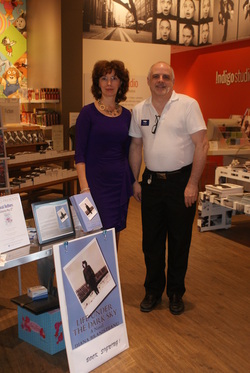 May 13th, 2012
Many thanks to Indigo book store’s manager and staff for holding the book signing event for my novel.
Thank you to the readers who purchased my book or just stopped by to learn about it.
I had the pleasure to share the table with another local author Adriana Caruso-Toncic who promoted her first novel “Diary of a Simple Girl”. For more information about her book please visit her website at
www.diaryofasimplegirl.com.

March 25th, 2012
Dear readers
On Saturday May 12th, 2012 between 12pm and 3pm you are invited to a Book Signing event at:
INDIGO book store at 5105 Gelnn Erin Drive Mississuaga, ON, next to Erin Mills Town Center Mall.
During the event I will be delighted to meet you and share my writing experience with you.
This will be the Mother’s Day weekend and the autographed novel would make a great gift for the person who loves you most.
Have a wonderful Spring season! 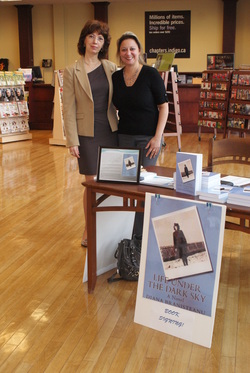 Many thanks to Chapters book store's management and staff, for allowing me to hold the book signing event, and their contribution to its success.
I thank all the readers that purchased my novel, the people who were interested in finding out about it, and my family who supported me as always.

Spring is in the air!
I am pleased to announce my second “book signing” session on Saturday April 14th at
Chapters -Erin Mills, Erin Mills Power Centre 3050 Vega Blvd, Mississauga. (HWY 403 and Dundas Street).
The novel Life Under The Dark Sky autographed by the author will be available between 11am and 4pm.

I’m looking forward to meeting you all there! 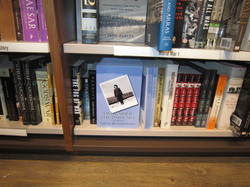 Life Under the Dark Sky is now available at Indigo book store in Mississuaga ON. 5105 Glenn Erin Drive, next to Erin Mills Town Center Mall. The novel can be found in the Fiction section of the store.  A big thank you to the store management that agreed to put the book on the shelf for the Canadian readers. 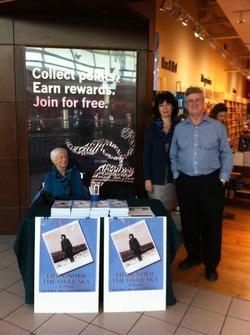 Thank you to all of you who came to my book signing event!
It was a success, and I already want to do it again. It was wonderful to meet people of different backgrounds who were interested in my novel, and shared their thoughts with me. I also thank my family, who supported me throughout this experience and contributed to its success.

My appreciation goes to COLES’ store manager and staff, who made this event possible and became the first book store in Canada to put Life Under The Dark Sky on the shelf, making it available to Canadian readers. 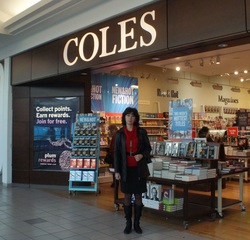 On Saturday January 21st, 2012 I will hold my very first book signing session at COLES book store, located in Erin Mills Town Center Mall, 5100 Erin Mills Parkway, Mississauga ON Canada L5M 4Z5.
I will be waiting to see you there between 11:30am and 4pm EST. I’m looking forward to meeting my readers! 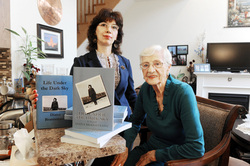 This is the article that was featured in The Mississuaga News newspaper on Wednesday November 2nd, 2011.
http://www.mississauga.com/what's%20on/article/1232892--book-brings-war-to-life

Book inspired by mother-in law's war memories
By Joseph Chin
Photo: Fred Loek
Seventeen-year-old Heidi was a free spirit, always ready to see more than her small Austrian town had to offer. To travel, to meet people, to follow her dreams.
But what dreams can she have when her country was about to be torn apart, caught in the maelstrom of World War II?
Thus begins Life Under the Dark Sky, a first novel by Diana Branisteanu.
The Erin Mills resident says she was inspired to write the book after hearing her mother-in-law recount the years she spent working, against her will, for the German army.
“I found it so interesting and compelling, one day I just decided to make it into a book,” said Branisteanu.
Rather than write a straight memoir, Branisteanu chose the novelization route so she could incorporate dialogue. But except for changing names (including that of her mother-in-law whose real name is Hewig Ponepal), she says everything in the book is factual.
At 17, Heidi was forced to enroll in the German army and leave her family home in Austria. She was taken to Pilsen, Czechoslovakia, with no idea whether she would live to see her family again.
And, except for a short medical leave, she didn’t see them for three years until the war ended.
“Her youth was spent under the dark sky of the Second World War and its endless dangers,” Branisteanu writes. “Under the enormous pressure of the army’s rules, the bombings and the continuous fear for her life, Heidi did not give up on the hope for a normal life. She found friendship, compassion and love in a world that had lost its human values.”
Now 87, Heidi came to Canada with her family in 1957. When her husband died some five years ago, she left Montreal to live with her son in Mississauga. That’s when she started telling her stories to Branisteanu.
“I would listen to all her wonderful memories,” said Branisteanu. “Then, because I was good at literature, a high-school friend (in Branisteanu’s native Romania) encouraged me to turn it into a book. At first, I was hesitant since English isn’t my first language, but I believed the story deserved to be told.”
Branisteanu started researching events and 18 months later, she self-published Life Under the Dark Sky. During the writing process, she would read the chapters, as they were completed, to Heidi.
Branisteanu says her book is non-political.
“It’s just about what a young girl had to go through during a war. And it was horrific. For instance, one time the train she was travelling in was bombed three times in eight hours. Then, after the Germans were defeated, there was the hardship of living under Russian occupation for another 10 years. It was a terrible period in her life.”
Life Under the Dark Sky is available through Amazon.